After Cockpitfest 2020 was cancelled due to COVID19 travel restrictions, all the more emphasis was placed on looking forward to 2021's event.

I planned for a helmet / mask display, specifically British gear spanning form the end of the second world war to modern day, covering the progression of various oxygen systems and helmet developments.

The tent was packed, clothes and food ready, display assembled, family looking forward to it...

Then the bombshell: the day before the event we had a call from someone we had been in contact with saying they were Covid positive, so we all duly tested and found one of our kids was also Covid positive. Words along the lines of "oh no" were said...

So attention shifted to sanitising the house, maintaining social distances, caring for the infected, PCR tests, and travelling exactly nowhere.

As the display was ready to go, and we were not going anywhere, we put the helmets / masks together on the kitchen worktop for some photos to send to Newark Air Museum to show we were there in spirit, and indicate the intentions of supporting the event.

During the Covid pandemic, we have become used to remote working, video calls, and the like, so I guess it was only natural that a remote Cockpitfest exhibit should follow suit! 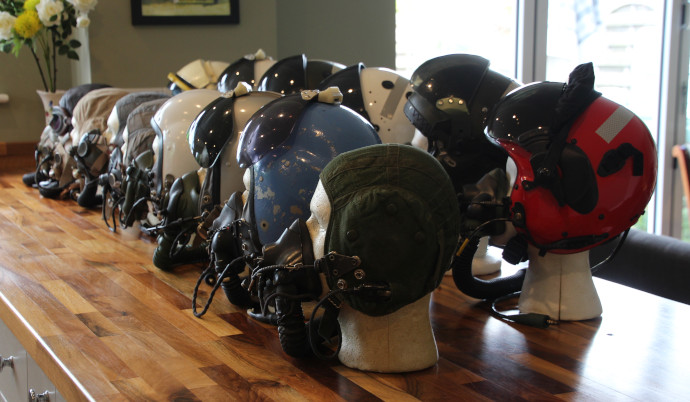 This is a later pattern C Wired helmet, where the wiring is half exposed at the rear. Dated late 40's / early 50's. The type H oxygen mask is a constant flow / economizer type. 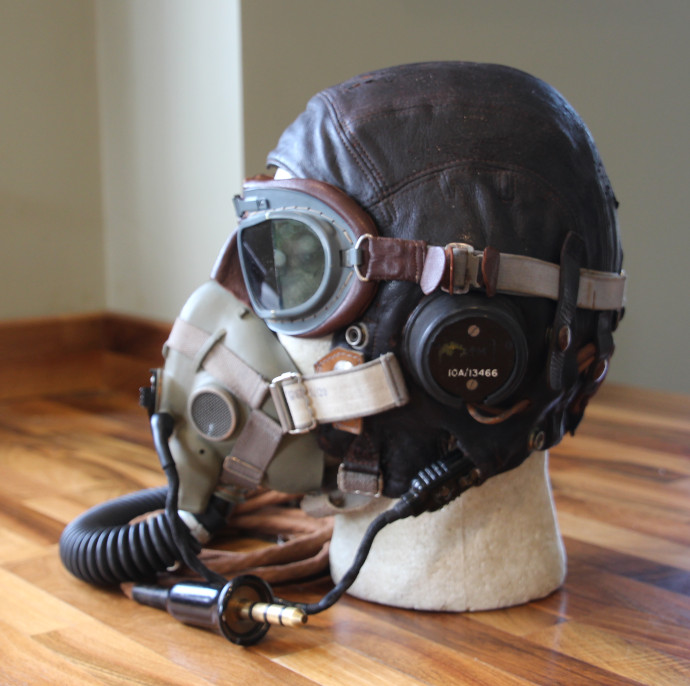 Closely based on the pattern of the type C helmet, the D included a sun protector for the back of the neck. It was used in warmer climates, but also for high altitude flights where the clouds offer no sun protection. The replica earphones of this helmet are my own resin cast mouldings.

I have placed it here with the type J oxygen mask, the first British mask for high altitude flights. It is a pressure breathing mask, containing a sprung expiratory valve, which applies pressure to the lungs, worn in conjunction with a pressure breathing waistcoat. It is based on the type H mask facepiece, but with additional strengthening pieces added, and elastic harness replaced by webbing for a firmer face fit.

The pressure can be set by rotating the knob on the front of the expiratory valve to 3 settings depending on altitude. 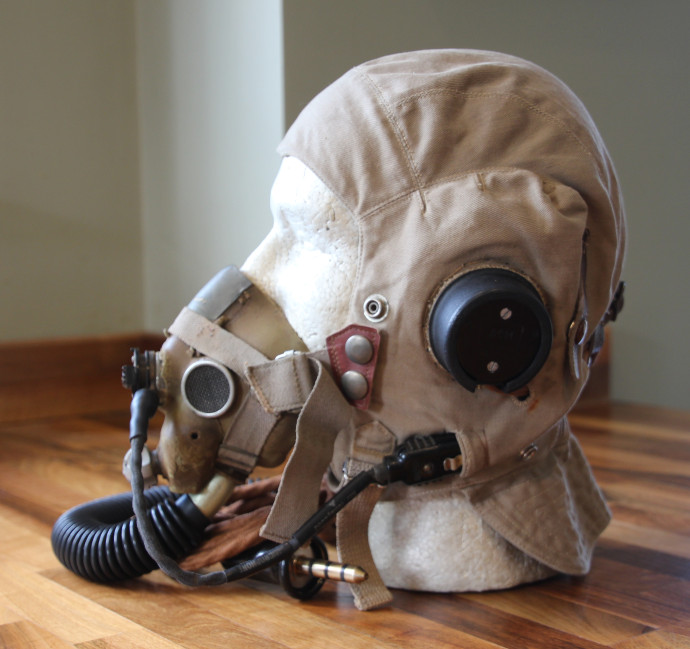 (I don't yet have an Aertex "Type E" helmet)

The F helmet's design helped to reduce the profile of the helmet sides by flattening the earpieces. This was in order to be able to pull a Mk. 1 / Mk. 1A helmet shell over the top.

The smaller "NATO" plug, or type 671 plug had been introduced in the type C* and E* helmets for use with ejection seats, and is seen here on the type F helmet. This is the end of the "Bell" plug, or type 119 plug. (Both types of plug and their corresponding sockets were made by Astralux, who also made GPO telephone connectors).

The type M Mk. 1 mask was a development of the type M, mainly with the addition of the exo-skeleton. It operates in a similar way to the type J mask with a sprung valve restricting exhalation to raise pressure in the lungs. The type M Mk. 1 has a round / tubular shaped exhalation port. 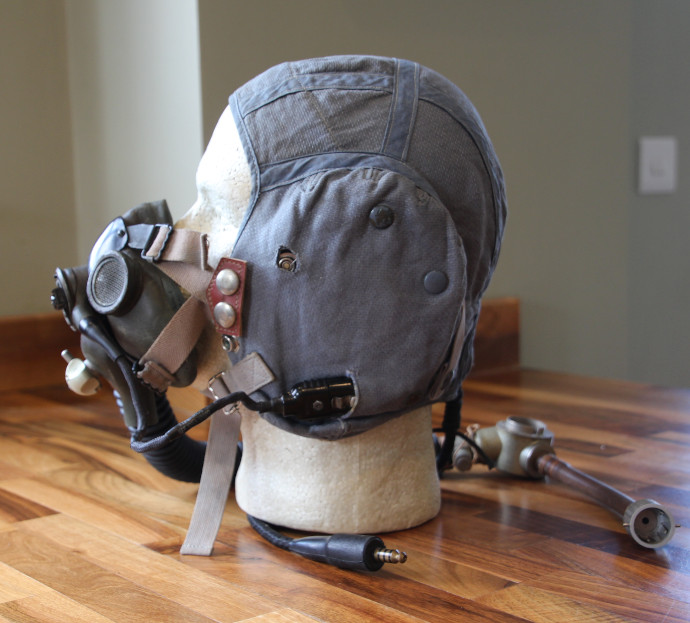 The main noticeable difference between the F and G type helmets is the two extra oxygen mask pop studs fitted to the cheeks. The addition of these coincided with the progression from constant flow / economizer breathing to pressure breathing, where the mask required to be held firmer to the face. additional to this the nape strap inside the rear of the helmet was changed form elastic to webbing.

The type M Mk. 2 mask is a further development of the type M Mk.1 (see above), with improved facepiece for comfort and sealing. Main noticeable difference is the rectangle shape of the exhalation port which was carried forward to the P/Q masks, and the use of black rubber over the previous green. 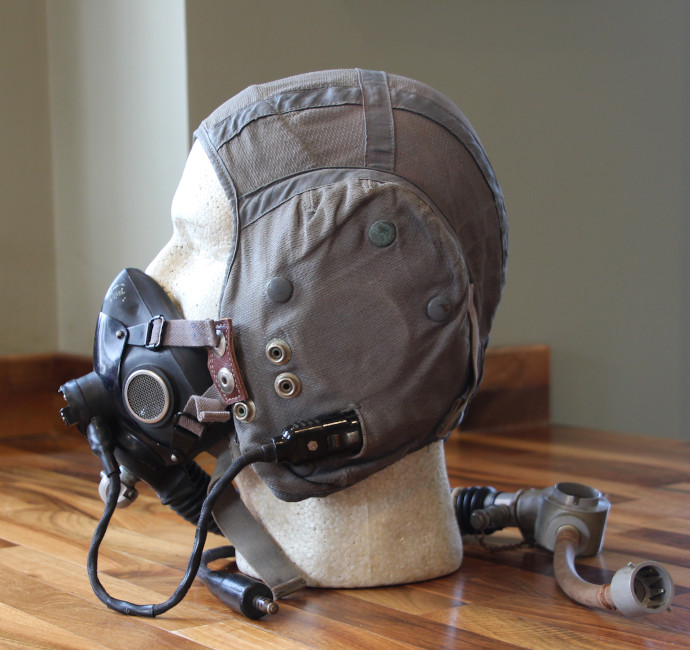 This configuration was used by the rear crew members of early V bombers (B1 Mk's). Note: the AEA documentation for these aircraft state helmet Mk. 1A with no visor fitted, i.e.: contrary to popular belief, this is not a "Mk. 1". Helmet painted "nuclear flash white".

The A-13A/1 mask was a pressure demand mask, so has no manual control on the outside, instead a pressure compensating exhalation valve is fitted. It is a derivative of the American MS220001 mask. If this example had a hose, it would be fitted with an MC3A connector. 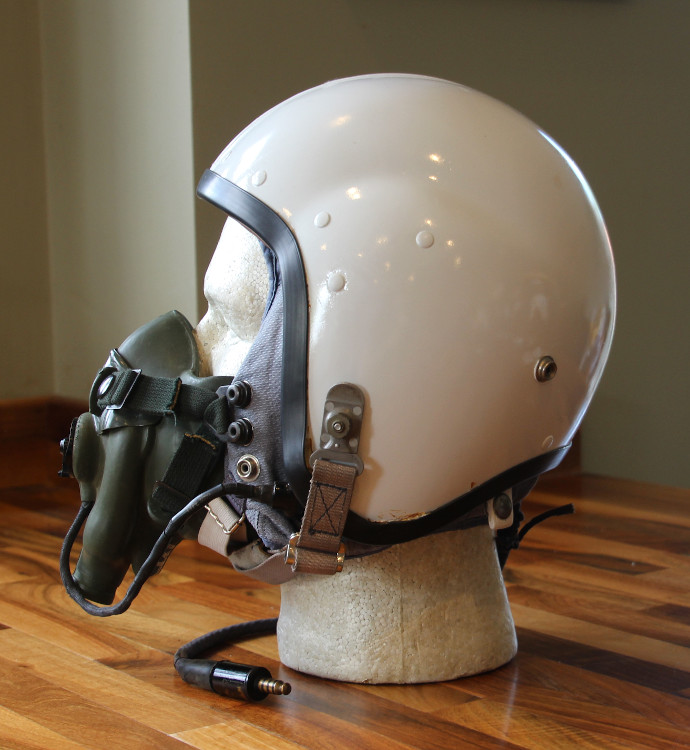 The 13-A/2 oxygen mask includes a Gabb toggle harness, over the webbing harness of the A-13A/1 mask. It is fitted with an MC3A oxygen connector. 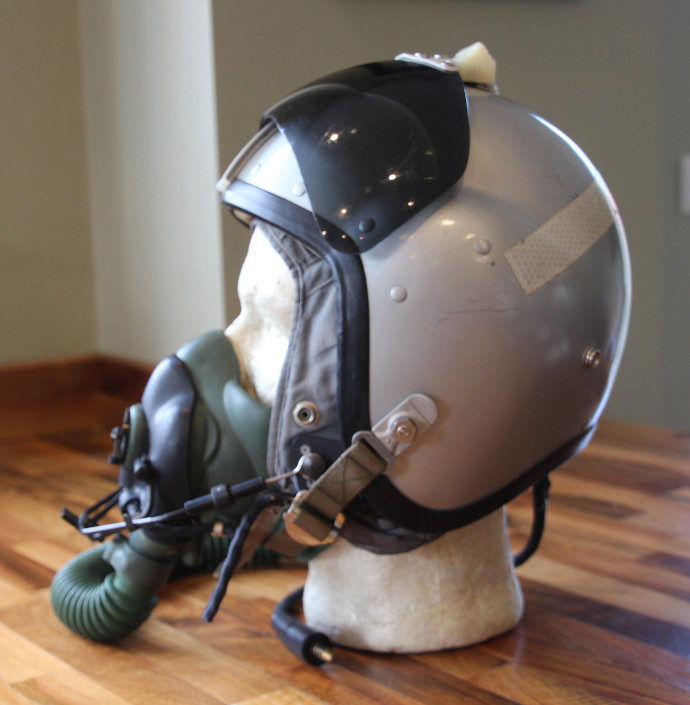 This Mk1A helmet has at some point been subjected to a pretty poor DIY paint job, so is in need of restoration back to the original silver colour.

The P series of masks were the first successful British pressure demand masks, following the principal of the A-13 series with a pressure compensating valve setting the pressure in the lungs. The P1A was fitted with an MC3A oxygen connector. 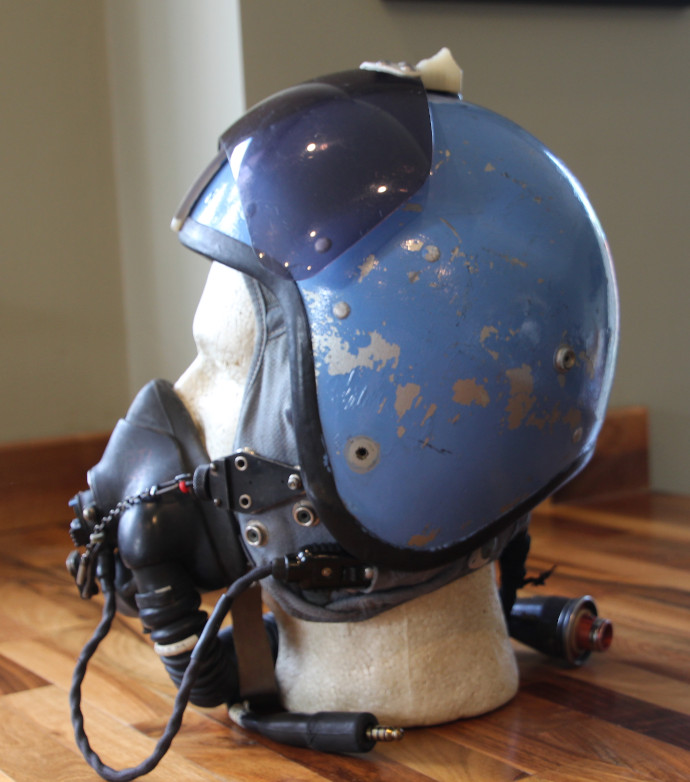 The P4 mask was exclusively for the Folland Gnat, it carries wires down the sides of hose to a special combined mic/tel/oxygen connector. A special wiring harness is also fitted to the helmet to utilise what would usually be the microphone socket for headset speaker connection instead. 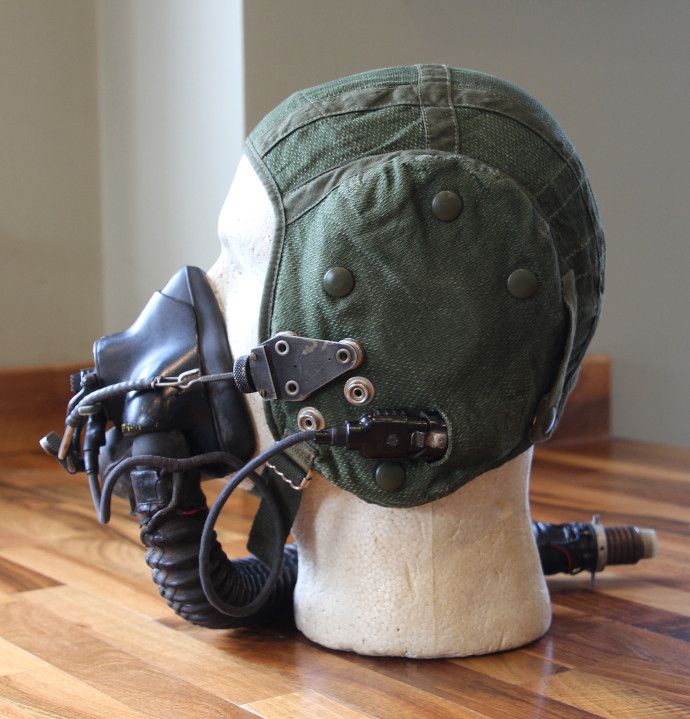 The mask is just a generic type Q as it was only for ground use it has no hose or connector to determine the suxffix characters of the type. It has had a blue heat shrink sleeving applied to the microphone cable at some point in its history too.

To further reduce the bulk of the sides of the helmet, a new headset concept was designed whereby a single headset speaker is installed in one of the bumps at the rear of the shell, and acoustic tubes carry the sound to the ear capsules. Pilots I have spoken to were no so keen on the echoey sound this produced, the later Mk. 4 series went back to individual speakers each side.

The Mk. 2 and Mk. 2A helmets are fitted with a weighted yellow bar which operates the visor when pulled (developed by M.L. Aviation) - the weight of the bar is designed to spring the visor down during ejection. Good concept, but added a lot of weight. 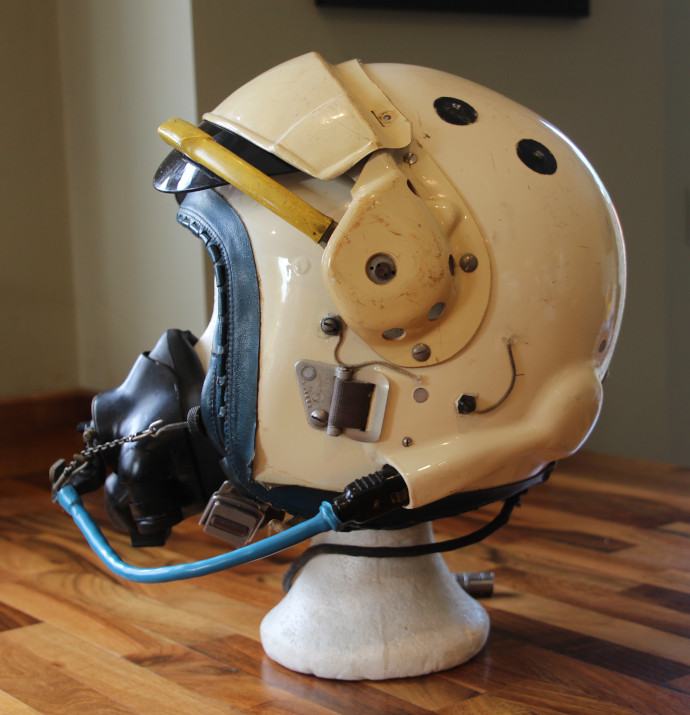 Basically the same shell, liner and headset design as the Mk. 2 helmets, but with the visor from the Mk. 1A helmets.

The P1A mask would be used in aircraft with pressure demand oxygen regulators, but no PEC. 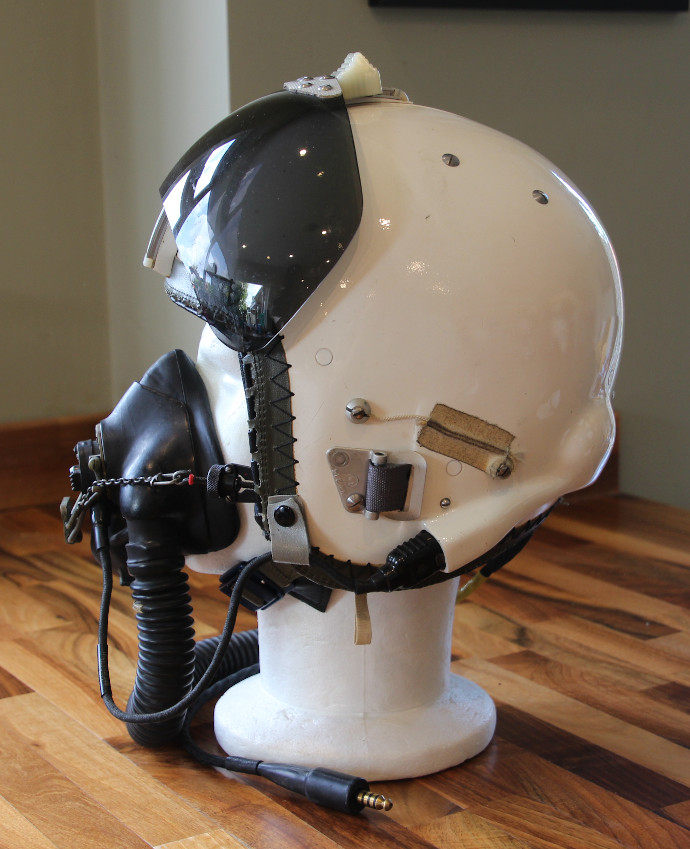 The Mk. 3C solved the problem of eye protection during ejection by using two visors, the clear being latched in place during the whole flight, leaving the tinted visor just for sun protection. This example is a converted Mk. 2A helmet; note holes from previous visor assembly, and re-use of flatter shaped visor from the original Mk. 2 helmet.

The P2A mask is suitable for pressure demand oxygen systems in aircraft equipped with PEC's such as the Lightning and later Mk. V bombers. 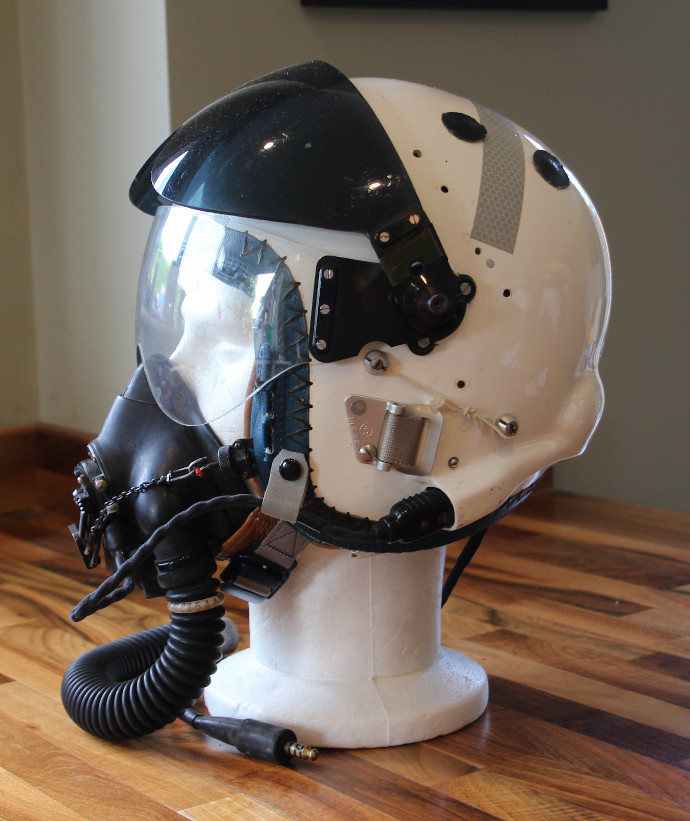 This Mk. 3C helmet carries the latter rounded shape visors, and also a plastic strip fitted to the brow to close the gap between the inner clear visor and the helmet shell, inn order to prevent ingress of canopy if shattered during ejection (pierced or MDC).

The V1 mask was specific to Phantom and Harrier aircraft and connected to a chest mounted oxygen regulator. The V1 and V2 masks (and also the X masks) have a small inner tube to allow the regulator to control the exhalation valve, and mask / lung pressure. 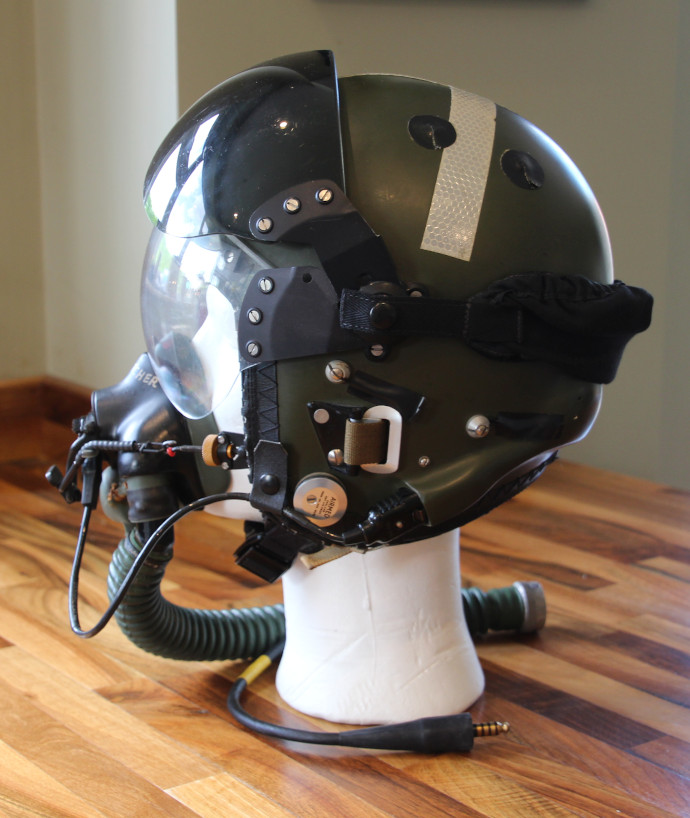 This Mk. 4A helmet is fitted with a communications cable suitable for certain variants of Jaguar aircraft, it had a delicate small LEMO connector.

The V1 mask was specific to Jaguar aircraft and connected to a chest mounted oxygen regulator. Only the connector differs from the V2 mask, but it sued with a different regulator. 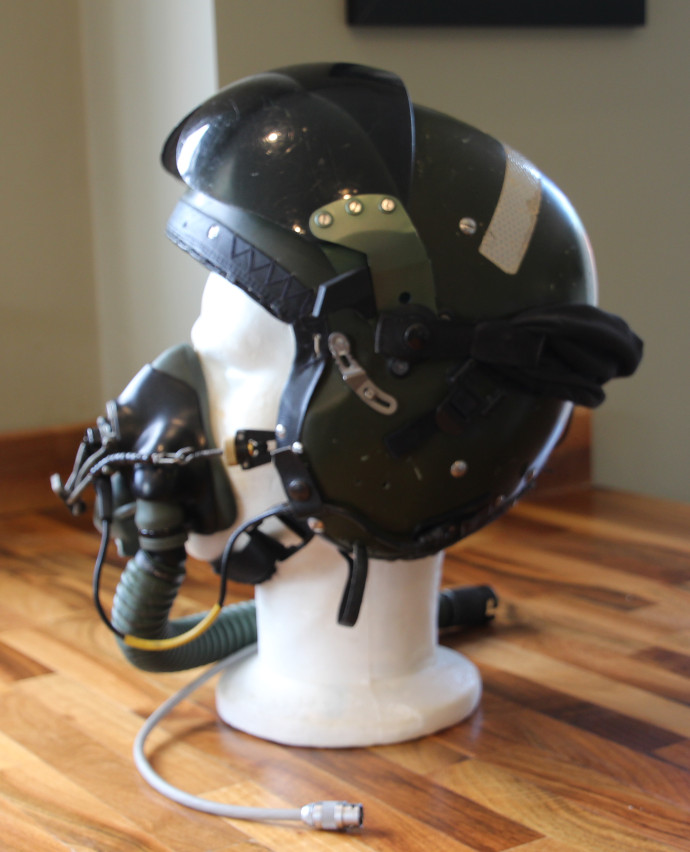 The Mk. 10B helmets mainly differ from Mk. 2, 3 & 4 helmets by changing the shell material from fibre glass to carbon fibre, reducing weight. This example had been painted red to be used for wet drill training exercises (luckily never used), was previously greeen. 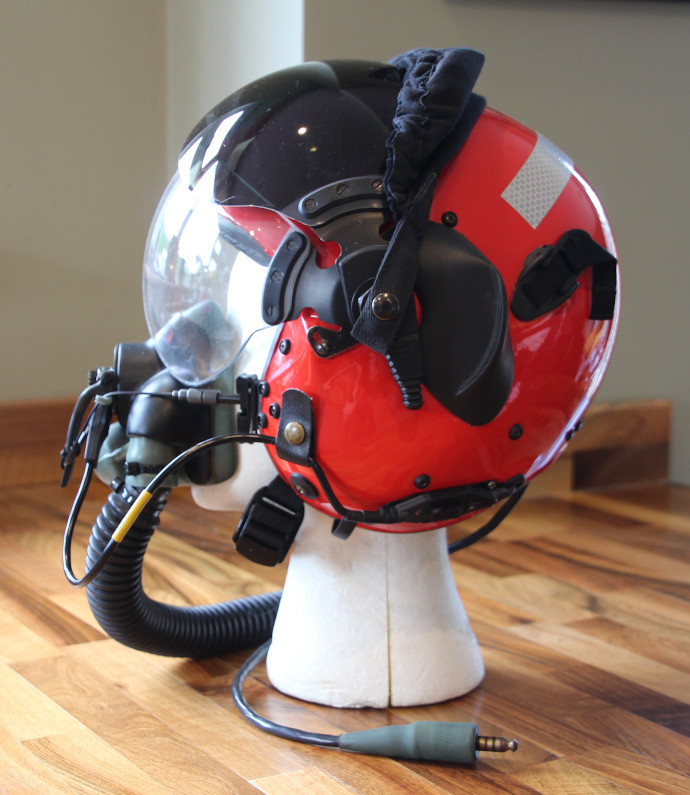 Thanks for reading, I hope if you went to Newark for CockpitFest 2021 you had a great time. It looks as though some really interesting exhibits arrived, that I hope to see next year!