Back to General and Technical Information.

Recently, I've had a few requests for help with these aircraft radios, so thought I'd start sharing some technical information about the PTR-175 radio itself and how it integrates with aircraft.

It's a beautifully engineered Cold-War era VHF & UHF communications radio, used in a lot of RAF aircraft from the 1960's to the early 1990's, and some are still flying privately today.

It was derived from the earlier UHF-only ARC-52 radio.

The technology is electro-mechanical, and is based on: thermionic valves; crystals; variable capacitors; rotary inverter power supply; and carbon-pile voltage regulators. Re-tuning is via a wonderful mechanical clunking, whirring function of gears and motors, introducing different crystals into circuit, and re-tuning variable capacitors.

It weights a ton and produces, at best, about 5 Watts of AM RF. 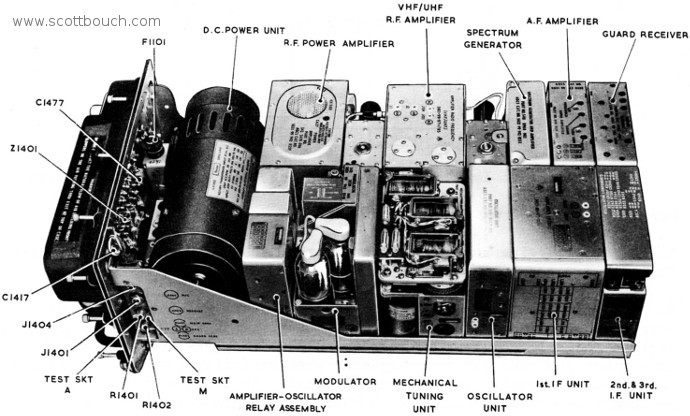 On it's own, the main Transmit / Receive Unit (T/R Unit) isn’t of much use, as it relies upon some other key components to build up a system to integrate with an aircraft:

Typically a whole aircraft radio system would also include a standby radio, and emergency power supplies for either radio. Also included would be other audio signals from navigation and warning equipment.