Growing up close to the hallowed ground of Bruntingthorpe Aerodrome, I was treated on an almost weekly basis to sights and sounds like this, taken from my parent's house in 2008:

My grandfather trained on Tiger Moth, Steerman and Harvard during WW2 as a pilot who also inspired my interest, and with my dad working in engineering, it was a recipe for disaster from the start!

I was lucky to get into the UK classic aviation scene at a young age.

Tony Hulls, a friend of my parents gave me the great opportunity at 11 years old to start helping to restore and maintain his T5 Lightning XS452 at Cranfield, which led into T5 Lightning XS458 too. This 18 year experience on these aircraft formed my "unofficial apprenticeship", and I'm eternally thankful.

Some 20-ish years later, I can't commit every weekend to aviation due to family life, but do give remote tech-support advice to help aircraft preservation groups as and when I can via email & phone, to help troubleshoot, and repair issues. In varying capacities these have included:

This tech support help normally involves sending me scanned diagrams and information, photos, and a description of fault-finding work already carried out. I can then sit down, study the information and put together a logical test procedure to be carried out on the aircraft, which will give us enough information to figure out the root cause of the fault. This process is effectively part of what I do for work, but on industrial gas turbine control systems.

As I have zero budget for any of this work (and of course I have no fee for my time), I have been lucky enough to receive some kind donations of, manuals, drawings, parts and equipment that's helped me to fault-find aircraft issues. I'm still trying to find some parts, listed here: Wanted.

Below Middle - I am now working on building another general ARC-52 and PTR-175 test rig that can help many aircraft types.

Below Right - A small test rig I built years ago for testing a G90 Gun Camera installed in the nose of an EE Lightning, it could test the aircraft, and the camera independantly. 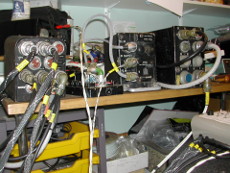 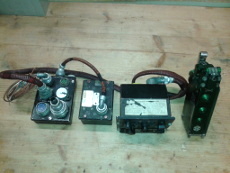 Click on the above images for test rig project info. 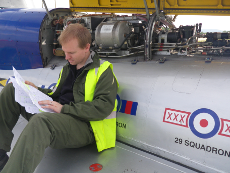 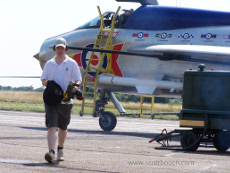 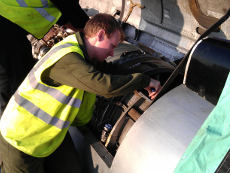 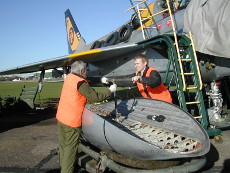 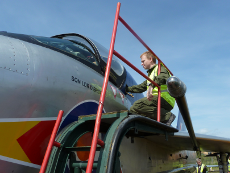 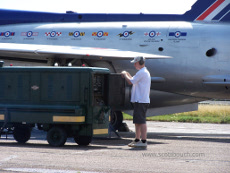 I initially led the project to re-engineer T5 Lightning XS458's engines to use electric starter motors. I sourced the DC motors and starter control panels, and carried out the initial design and installation work. I handed the lead role over to Rod Barker when we had our first child, as family life took over.

This video was taken 06-08-2011 just before we carried out the electric starter conversion, and shows the last ever high speed taxi run started by AVPIN. I filmed most of it while running about doing ground crew duties of the startup, plus other bist of film from others. Big video, sorry about the buffering...

I've received some very kind help from people who have found my projects by stumbling across this website and made donations, so to acknowledge their kindness, many thanks go to: